"Go home and be a family man!"

Guile "Gilly" is a vidya character that hails from the Melty Blood franchise. Most often seen in Fightan Game Generals, he occasionally wrestles in the /v/WE circuit, with much fanfare to the crowd. He is known to the announcer as "The Soldier," mostly because he is a senile old cunt. He is a MURKAN hero and the chat cheers whenever he shows up.

Gilly has no team affiliation, because he is the only character from Nintendo at the event. Some have begun talks with Hideo Kojima, Nintendo's CEO, to add more nintendo characters to his team, but on the matter he refused to allow another teammate at the moment, saying "his body wasn't ready".

Rumours says Wario is actually planning to hire him as a henchmen also by "gving him da chawklet".

His most famous matchup had him against Adam "The Future" Jensen. While it was a long, brutal, and mostly lulzy event, Gilly was defeated by his augmented opponent. Adam would later go on to win a rumble matchup, as well as become one of the few /v/WE wrestling Champions. Sources say Guile returned home for a short stint of being a family man although this has not been confirmed.

A common participant in Rumble events, he often loses, but not without taking a few with him along the way. They say that he still holds bitter feelings to Adam. 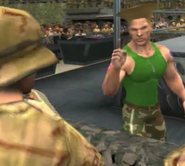 Go home and be family men

Retrieved from "https://vidyawrestling.fandom.com/wiki/Guile?oldid=9861"
Community content is available under CC-BY-SA unless otherwise noted.